June 23, 2019
I said I can't write lately, and someone said it's writer's block, but it's not. It's more like, well, I could sit down and write, but it feels meaningless and small. Of course, writing has always felt small to me on some level, or I wouldn't have focused on all things teeny tiny. Surely I'll return to some "small but mighty" writing and publishing projects soon (as a friend kindly described them years ago). I was grateful to be able to raise a couple hundred dollars for Immigrant Families Together with my last tiny zine. I have an idea for a new zine that will tell the story a new online friend shared with me about her work with recent immigrants in New Mexico. If I didn't believe in the power of writing, I wouldn't spend my life teaching college students how to write in clearer and more focused ways. And it's a privilege to have the time and ability to write, and the access to a computer and a printer and an internet connection.

But it's difficult to think about piecing a poem together when I keep thinking about the fact that our government is "detaining" kids in horrible conditions because they crossed a border. This is our government. This is what our taxes pay for. This is cruel and inhumane, and for me at this point, it doesn't matter who started ICE or who maintained it or who made it worse. The abuse of power simply needs to stop. What are we doing to help make it stop? Are we telling our officials every day that we want it to stop? Are we telling our neighbors? Why aren't we in the streets week in and week out until this stops?

What are our government officials doing right now instead of focusing on stopping this assault on basic human rights and dignities? One of my senators had an item on her Facebook page recently about the US women's soccer team and pay inequalities, and while I agree there are problems with pay inequity, right now I don't care to hear about anything else from my government representatives except what they're doing to release kids from detention--and adults, too. Seeking asylum isn't a crime.

The suburb where I live recently had a conflict because the city officials wanted to build a road to access the beach more easily in case of emergencies. Well, there was a huge Save Our Beach campaign from citizens who didn't want a road impacting the beach. Their campaign stopped the road from being built. People picketed and wrote letters and gathered signatures and went to the council meetings. Locally, a lot of people were really in an uproar about it. For me this proves two things. One is that it's much easier for people to get worked up and take action about "not in my backyard" things that they perceive as affecting them directly. The other is that you can, indeed, fight city hall. As Audre Lorde said (quoted by Sarah Schulman), "That you can't fight city hall is a rumor being spread by city hall."

Can we all wake up to the fact that kids are being abused in our very backyards? Maybe being a (former) foster parent and someone who has not borne a child has helped me to understand that all children are our children. Anyone can help a child. Something that might take a small amount of your time or effort or money can make a big difference to a child. We have to be the responsible adults here and reach out to help. I know people are like, but what can I do? And I think that's an ongoing question. Try to think of one thing you can do each day that goes beyond what you do on social media. Contact a legislator. Donate to a group that is providing legal help to immigrants and/or bearing witness at "detention" facilities. Have a garage sale and donate the proceeds. Make a sign that says "I Stand with Immigrants" or "End Immigrant Detention Now" or anything that feels right to you, and hold it anywhere that others will see it. If you don't want confrontations with people, stand on a pedestrian overpass above the freeway. Call a friend and hold signs together. Keep saying to everyone who will listen that you do not abide what is happening to our neighbors at the hands of our government.

But it's not for me to tell anyone what to do. I just have ideas if you want them, and I get the impression that people want to help but feel short on ideas. What we're really short on is time. We have to act now because every day that kids are away from their families is too long of a time. If you want to work on projects together, please feel free to leave me a comment here or email me or send a message on Facebook, etc. Even if you don't know what you want to do but want to do something, let's talk about it. Or talk to a friend or your partner instead of me. But let's talk about it and do something every day, and then tell other people what we're doing.

To end on a happier note, my mom invited me over the other day, and I helped her with making some stuffed toys to send to kids living at the border. We're going to mail a box of toys this week to Team Brownsville. 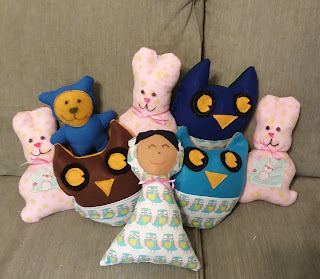 Popular posts from this blog

Medium.com as a Place to Self-Publish (Kinda)

June 01, 2022
I started writing on Medium.com in late September of 2021, so I've been writing on the platform for eight full months now. Before I started on the site as a writer, I'd seen Medium articles come up in Google searches now and then, or my students had sometimes referred to articles in their papers. And I'd seen a couple YouTube videos about how Medium pays writers for their writing. Finally I decided to give it a try when I discovered that a lot of people read and share poetry on Medium. I thought it might be a fun way to find a new audience for my work and to meet other writers who are interested in different modes of self-publishing. It's not easy to get paid for your written work as a poet, so I thought it would be interesting to explore the possibilities on Medium. Medium is sort of a hybrid situation in terms of self-publishing. When you post work there, you still own the copyright. But instead of hosting the work on your own website or sharing it in a book or zine
Post a Comment
Read more

December 18, 2012
I was posting so regularly for a while! Well, it's hard to keep up a strong pace when you're busy grading final papers and calculating final grades and so on. Now I have a break until January 2. Maybe I'll even write some poems--I hope so! Recently, I wrote a little article about creativity and posted it at ezinearticles.com. I thought it might be a good idea to try posting my work elsewhere and maybe connect with a new reader or two. Here's the link to my article on three easy ways to increase your creativity .
2 comments
Read more

New Zine and a Fundraiser for Kids in Foster Care

August 09, 2021
I'm excited to announce a new zine project from Teeny Tiny Press called Thank You . Using the classic Teeny Tiny format of an eight-page, single-sheet zine, Thank You collects a series of thank you notes in the form of poems and very short prose. Issue one includes work (in alphabetical order!) from Maura Alia Badji, X.P. Callahan, Del Ray Cross, Laura-Marie River Victor Nopales, BT Shaw, Eileen Tabios, and Mandy Zeller. To launch this zine, I'm doing a month-long fundraising drive (Aug 9-Sept 10) for Treehouse, a Seattle-based organization that helps kids and young adults in foster care. This is part of a larger back to school fundraising drive from Treehouse. They help kids with clothes, school supplies, books, toys, and much more. If you want a copy of the zine, donate an amount of your choice to Treehouse via https://engage.treehouseforkids.org/teenytinypress , and send me an email or instagram message with your mailing address. Then I'll send you the zine! Thank
Post a Comment
Read more